Variants of Level Gauges and Their Construction or Working

Conservation of any liquid including water can be done only by precise monitoring of its level. Water is the simplest and most indispensable liquid fundamental to human existence.

We use it extravagantly in our day to day lives, but do we actually worry about the amount of water we need for the particular the purpose? Such unnecessary waste of water creates scarcity and also has bad effect on our environment. Monitoring water level, and thereby its consumption, can help in its conservation.

The estimation of quantity of liquid and its consumption/conservation can be monitored using level gauges. Pune Techtrol, a prominent level gauges manufacturers in India, showcases a wide range of level gauges for liquids, which will make your liquid level measurement easy and meaningful!

The gauge is mounted parallel to the side of the tank to form close loop causing the liquid it level in the gauge. Thus liquid level can be observed through a gauge glass.

Reflex gauge is designed for distinct visual indication of liquid level in vessels under high temperature and pressure. It is suitable for clean and colorless liquids.

It consists of liquid chamber and flat glass whose inner surface has precisely molded prismatic grooves cut on it. Hence it is called “Reflex flat glass”.

The inner surface is of the flat glass is placed on liquid chamber with cushion & gasket and cover plate and all held together by U bolts as shown in adjacent figure. The chamber is fitted with end blocks at its top & bottom.

The gauge is mounted parallel to the side of the tank. The portion of the gauge-glass, up to which the liquid level stands, appears black due to refraction of light passing through liquid and the prismatic grooves, whereas it appears to be silvery-white in the glass portion above liquid level or that covering vapor space.

Thus RFG eliminates all the possible errors that occur while measuring liquid level. This level gauges for liquids are available for pressure and temperature rating of 210 Kg/cm2 & 400 ⁰C respectively.

The construction is similar to that of reflex gauge except that it consists of a liquid chamber formed by one metal piece and a pair of gauge glasses that have smooth finish on both sides and are fitted on front and rear side of liquid chamber. It is used for dirty and viscous liquids and liquid/ liquid interface .They are available for pressure and temperature rating of 210 Kg/cm2 & 400 ⁰C respectively.

Working -It consist of a magnetic float housed inside the chamber whose Material Of Construction (MOC) is suitable for the liquid of which level is to be measured, and level indicator clamped externally on the chamber. The float follows liquid level and is magnetically coupled with indicator.

The indication of level can be displayed in three types

It can be provided with alarm switches and transmitter which can be clamped on the chamber externally.

b) Float and Board Gauge (FBG) 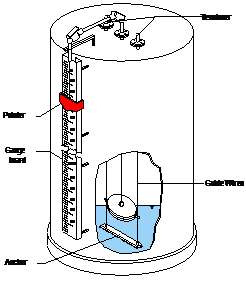 Working – It consists of float connected to wire rope via set of pulleys. Float follows liquid level and pointer glides over gauge board, fitted outside the tank, to indicate liquid level.Pointer is in Top position when tank is empty and in bottom position when Full.

The gauge is available in material of PP, SS304/316, and PVDF ctd. SS304 and is suitable for maximum temperature up to 150 ⁰C and atmospheric pressure. 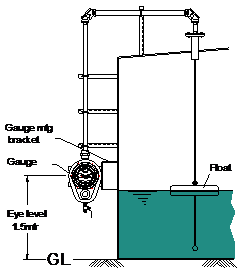 Working – It comprises of float attached to a SS tape whose other end is wound on storage drum through a sprocket pulley carrying constant torque spring housed inside the enclosure and gear mechanism for pointer movement.

Float follows the liquid level and ss tape gets wound and unwound on sprocket pulley whose rotation is transferred to a pointer through gear mechanism to indicate accurate liquid level on dial.

FTG is available in material of SS316 and can be provided with guide wire to prevent horizontal movement of float in the tank. It is suitable for max temperature of 120 ⁰C and atmospheric pressure.

FTG is reliable and maintenance free gauge suitable for liquids in underground and partially underground tanks.

It is available in analog and digital indication. It consists of float attached to SS wire rope, the other end of which is wound on drum carrying constant torque spring housed in weather proof enclosure. Float rises and falls according to liquid level and results in rotation of drum.

Its motion is transferred to pointer through a gear mechanism and level is indicated on dial. In case of digital indication motion of gear induces variable voltage which is converted into 4-20 mA signal output and level is simultaneously displayed locally on seven segment LED display.

Techtrol is a leading level gauges manufacturers in India provides FDG in material of SS04/316 or PVDF ctd SS and is suitable for max temp of 100 ⁰C and atmospheric pressure.  FDG with analog indication is available with two alarm switches.